Comet NEOWISE is one of the brightest comets for over 20 years, and one of the few comets visible to the naked eye this century. It was discovered using the NEOWISE space telescope on March 27, 2020.

Comets have always inspired awe as well as dread. Seen as carrying messages from heaven, they have also inspired predictions of war and famine. In 1997, 39 members of the UFO religious group Heaven’s Gate died in a mass ritual in order to reach what they believed was an extraterrestrial spacecraft following Comet Hale–Bopp.

Recent newly discovered comets have looked promising but ended up fading away when they neared the Sun, like the ‘Doomsday’ comet Elenin in 2011. In 2013, the “Comet of the Century”, ISON, was supposed to be brighter than the Moon but also broke apart and no cataclysms ensued.

But according to Space.com, “The early reviews are in: Comet NEOWISE is a hit!” [1] And NASA said this inner-Solar System intruder “might become known as the Great Comet of 2020.” [2]

Comet NEOWISE should be visible in the Northern hemisphere for all of July 2020. The best time for viewing is between July 14 to 19, before sunrise and after sunset.

Vivian Robson says the effects of comets “appear to be exerted through the constellation in which they appear, and also through the zodiacal sign and degree to which their position corresponds. They are said to cause inordinate heat, pestilence, sterility of the earth, wars and changes in kingdoms, winds, earthquakes and floods, and are assigned to the planets according to their colors. [3]

According to Jonathan Flanery, the “effects of comets were supposed to last for 1/8 of their period; to the ancients this would most likely have been their period of visibility… Their appearance was heralded by disturbances in humans, animals, and the weather. The comets then dispensed, by perihelion position and their dispositor, their good or ill effects – usually ill. They also often heralded the rise of an agent. This agent could be a war leader but might, depending on the position of the comet, show a religious leader, reformer, or great trader.

The message is not delivered until the comet makes its closest approach to the Sun where the message is assimilated into the system… These new decrees are issued at perihelion. Perihelion is the sensitive point to watch during the duration of influence of the comet as this is the message. The message alters trade and political arrangements and form alliances into new patterns – it creates new connections… When the place of perihelion is transited by Mars or the Sun, effects begin in earnest, the decree is implemented and arrangements change radically.

Comets signify realignment of trade, financial and political arrangements with an initial disruption in the system. Later on, after ignition, that is transit by Sun or Mars, the winners and losers become apparent. Even so, the effects may linger for some time with the perihelion as a sensitive point for many years, sometimes centuries.” [4]

The chart below shows the comet (X) at 01°16′ Leo, opposite Mars and Saturn, and square Uranus. The most significant aspect is the comet opposite Saturn (0°52′). 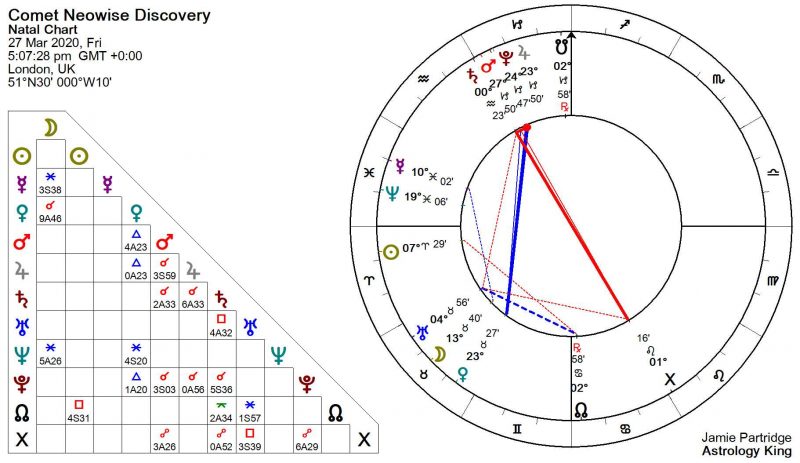 The arrival of this comet has coincided with a great upheaval for humanity and the biggest restrictions for generations with the coronavirus pandemic (declared on March 11). The result has been just as you would expect from an opposition to Saturn: fear, death, suffering, unemployment, poverty, geopolitical change, and possibly famine. On March 27, the number of confirmed cases in the United States overtook China and Italy, and the US death toll surpassed 1,500.

The opposition to Mars adds irritation, meanness, cruelty, violence, operations, fevers, rioting, and danger of war. It places pressure on police, security guards, and the military. It urges you to be strong, brave, and to use your initiative and take the lead.

Remember Robson said the effects of comets “appear to be exerted through the constellation in which they appear, and also through the zodiacal sign and degree to which their position corresponds.” [3]

This image from The Sky Live shows the comet first appeared in Constellation Puppis, the Poop Deck of the Ship, Argo Navis.

Constellation Argo is said to give prosperity in trade and voyages, and strength of heart and spirit, but it has been observed to accompany cases of drowning. According to Ptolemy, the bright stars are like Saturn and Jupiter (dignified, pious, conservative, acquisitive, retentive.) [3]

The influence of comets in the zodiacal sign of Leo: Destruction by wild beasts and vermin, trouble to the nobility, war towards the end of the year, especially in the east, and ailments affecting the eyes. If in the east, storms and drought; if in the west, sickness and danger of madness to dogs. [3] (Comet Neowise is seen in the east.)

Comet NEOWISE has an orbital period of 6,766 years. The list below shows the fixed stars conjunct comet NEOWISE at its discovery:

23 Ursae Majoris (0°10′) is named Alhaud IV, from the Arabic word Al-Haud, meaning ‘the Pond’. [6] Constellation Ursa Major the Greater Bear is said to give a quiet, prudent, suspicious, mistrustful, self-controlled, patient nature, but an uneasy spirit and great anger and revengefulness when roused. According to Ptolemy, Ursa Major is like Mars (violent death, ultimate ruin by folly or pride.) [3] Astrologically both Bears were said to presage an evil influence. They are particularly injurious as regards to the affairs of nations and kings. [7]

Eta Ursae Minoris (0°41′): Constellation Ursa Minor the Lesser Bear is said to give indifference and improvidence of spirit, and to lead to many troubles. [3]

Pi Puppis (0°42′) has the traditional name Ahadi, which is derived from Arabic for “having much promise”. [8]

There are also significant fixed star conjunct the planets in the discovery chart:

Moon conjunct fixed star Menkar (14 ♉ 35): Mental anxiety, hatred of the vulgar, ill-will of women, danger from thieves, sickness to native and family, loss of marriage partner or near relative, quarrels, legal losses, legacies and inheritances attended by much evil. Lean and infirm, many miseries.

Venus conjunct fixed star Zaurak (24 ♉ 08): A struggle to overcome melancholy and feelings of great loneliness. So try not to take life too seriously and put too much weight on everything people say. Otherwise, this star could trigger off fear of death and suicidal tendencies.

Robson said comets are assigned to the planets according to their colors. Recent images of comet NEOWISE show it is mainly a golden orange color. It actually has a number of different colors coming from the nucleus and its two tails. 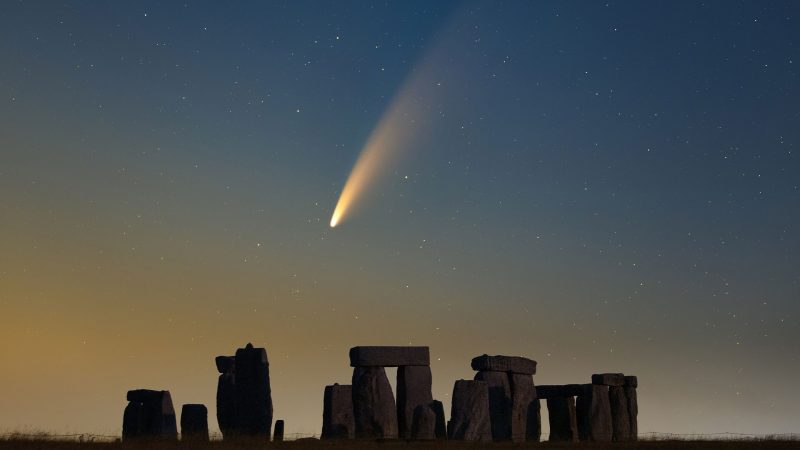 “The first tail’s color is magenta and made of gas and ions; the second twin tail is a golden color and made of dust.” [9]

Gold, orange and yellow colors could be applied to the Sun, Venus and Jupiter: “Those of the nature of Jupiter, abundance of corn and fruit; Sun, plague, sickness, and death of kings; of Venus, drought and trouble to kings and women” [3]

The comet made its closest approach to the Sun (perihelion) on July 3, 2020, at 16:21 UT. [3] This places the comet at 29°54′ Gemini. More comet NEOWISE predictions can be interpreted from its perihelion position (X) in the chart below.

The comet is exactly quincunx Saturn. So, like the June 21 solar eclipse it is conjunct, it causes an imbalance between personal freedom and responsibility, between self-expression and restriction.

A patient, cautious, and responsible attitude is required. But flexibility and openness are also needed as you adapt to changes in the level of restrictions in response to the coronavirus pandemic. The eclipse should amplify the effects of the comet. 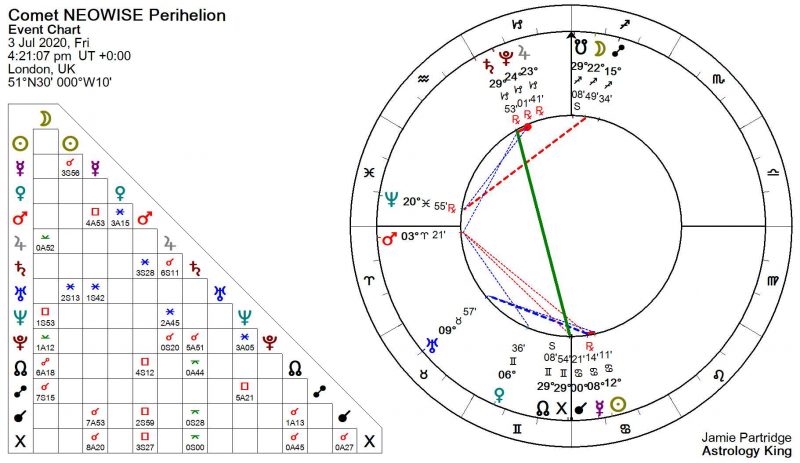 Fixed Star Mekalinan gives great initiative, high enterprise, and enthusiasm. But caution and objective second thoughts are needed because of impulsive, reckless, combative, and destructive nature. It may cause ruin, disgrace, and a violent death because of excess pleasure-seeking. Only when really in good aspect is this fixed star rated as a positive acting one. Badly positioned, this star will be most unhelpful.

All of Creation Is watching Earth and witnessing its Ascension Process. They are ready, ready for this Planet to be Declared a Light Only Zone. All of Humanity are called upon now to Step Up in fulfillment of their Divine Soul Contract.

The dark has been cleared, fully defeated and New Earth, Nova Terra, is ready to begin. This requires each Being to fully clear the remaining density within their bodies, to awaken to full remembrance of their Galactic Truth, their Soul Essence, their Divine Blueprint.

This is not a Drill, in Real Time, Present Moment of Now Mother of All Creation is on the Planet and she is Our Divine Director, Our Eternal Mother. She hired you for this role and She is here to guide you.

Mother has the entire Galactic Federation of Light and all the Angels with Her in all moments. She also has Her guide/ambassador Robin Williams and Master St. Germain by Her side. There is no session like this available on the planet, or in all of Creation.

LoveHasWon.org is a Non-Profit Charity, Heartfully Associated with the “World Blessing Church Trust” for the Benefit of Mother Earth

VISIT OUR LOVEHASWON DIRECTORY… ALL OUR PLATFORMS ACCESSIBLE IN ONE PLACE ~ https://linktr.ee/lovehaswon777

Feel Blocked, Drained, Fatigued, Restless, Nausea, Achy, Ready to Give Up? We Can Help! We are preparing everyone for a Full Planetary Ascension, and provide you with the tools and techniques to assist you Home Into The Light. The First Contact Ground Crew Team, Will Help to Get You Ready For Ascension which is Underway. New Spiritual Sessions have now been created for an Entire Family, including the Crystal Children; Group Family Healing & Therapy. We have just began these and they are incredible. Highly recommend for any families struggling together in these times of intense changes. Email: motherofallcreation@lovehaswon.org for more information or to schedule an emergency spiritual session. We can Assist You into Awakening into 5d Reality, where your experience is one of Constant Joy, Wholeness of Being, Whole Health, Balanced, Happy and Abundant. Lets DO THIS! Schedule Your Etheric Surgery With Mother God Below, Including TWO sessions with a recommended donation of $88.88

🌈 If you wish to participate, collaborate or coordinate with us on projects or services that are similar to the mission of Ascension for Mother Earth & Humanity, contact us. It is an Honor to connect with those of the Heart, in Unity Consciousness.

Receive THE TRUE STORY OF CREATION, The Tree Of Life Book ~ https://gaiaswholehealingessentials.org/collections/higher-consciousness-transmutations/products/lovehaswon-tree-of-life-book

Donate through our Paypal Charity:

Use Cash App with Our code and we’ll each get $5! FKMPGLH

We also accept Western Union and Moneygram. You may send an email to michaelsilver@lovehaswon.org for more information.

***If you wish to send Donations by mail or other methods, email us at motherofallcreation@lovehaswon.org  or  michaelsilver@lovehaswon.org***

Send us an Email

Send us an email and I'll get back to you, as soon as possible.

Ready to Take The Next Steps? BOOK YOUR INCREDIBLE SPIRITUAL INTUITIVE ASCENSION SESSION

Type and press Enter to search